Cochlear implants help many people with hearing loss in Santa Barbara whose impairment is too severe for hearing aids.

For children, whose language development is dependent upon an ability to hear, they can be life-changing.

In order for kids with cochlear implants to hear even more effectively, researchers recommend singing.

The Benefits of Singing 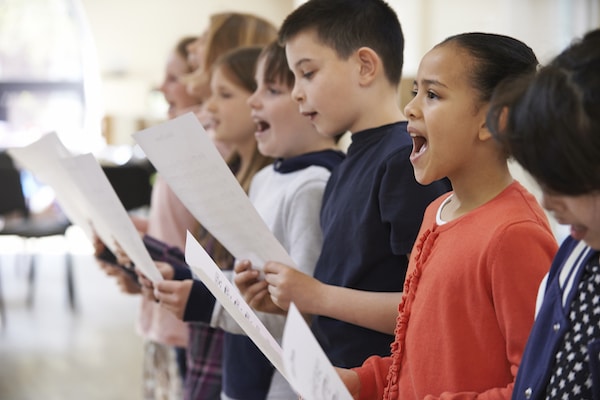 Children with cochlear implants who sing informally can improve their overall hearing ability, according to the results of a study in Finland.

Researchers looked at three groups of children aged 4-13 to measure their “speech-in-noise” ability (how well they understood speech in noisy settings).

Children in all three groups were asked to point out pictures representing words and phrases that were being broadcast over a loudspeaker.

They were situated in rooms with steady background noise.

Not surprisingly, the kids with normal hearing had the best overall speech recognition.

Those who wore cochlear implants and enjoyed singing showed better attention and speech perception skills and were better able to recognize rhythm patterns than the kids who were less likely to sing.

The Challenges of Background Noise

Background noise affects anybody with hearing loss in Santa Barbara.

Those who wear cochlear implants struggle even more because these devices have a narrow audio range that makes it harder to process simultaneous competing sounds.

This places young children, whose language and learning skills are dependent upon being able to hear, at a disadvantage; background noise is impossible to escape in school and daycare settings.

Long-term negative effects include low self-esteem and poor relationships with peers; these can result in academic struggles and social isolation.

Kids whose parents sing to them are more likely to pick up the habit of informal singing – that is, the type that might occur in response to reading a nursery rhyme or watching a movie.

It’s likely that paying attention to their parents’ mouth and lip movements while singing helps learn to rely on visual cues more effectively.

Most songs kids like to sing have few words and rely heavily on repetition, factors that seem to be instrumental in achieving the best overall results.

Your Santa Barbara audiologist suggests you encourage your kids to sing as much as possible, especially if they wear cochlear implants.

You may have to invest in a few more Disney movies than you’d planned, but their long-term hearing health is worth the sacrifice.